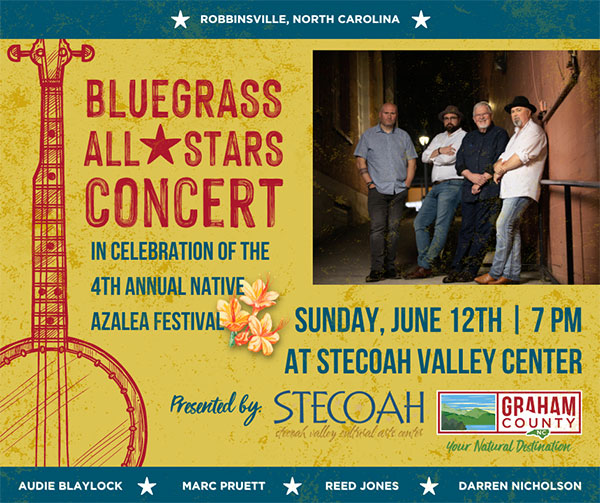 Darren Nicholson and Marc Pruett of Balsam Range with Audie Blaylock and Reed Jones of Redline will be ‘Spreading the Good Word of Bluegrass’ during this special Sunday night performance. They may be just playing around and having fun between tours but these four have been raising the roofs under the banner of the Bluegrass Allstars.

And it’s no wonder –together they have more awards, honors, and degrees than you can shake a stick at. The combined talent and experience of these musicians is a force to be reckoned with and you don’t want to miss this opportunity to see them on our small stage. It’s sure to be an evening to remember.

Nicholson who hails from Haywood County is a multi-talented musician and songwriter with multiple IBMA awards and a Grammy nomination under his belt. He has appeared on the Grand Ole Opry and many other famous venues. His love for collaboration is a thread that sewed this group together.

Blaylock is a singer, composer, and instrumentalist whose feet are firmly planted in the bluegrass tradition. He too, has a string of IBMA awards and a Grammy nomination. He touts numerous #1 charted singles and one of his compositions is the theme for a Travel Channel series.

Pruett is a musician about town and has played in a long line of bands. A founding member of Balsam Range, he is not losing the IBMA award race. In 2010 Pruett was awarded an honorary Doctorate of Arts by Western Carolina University in recognition of his professional musicianship and to acknowledge his support and love for Southern Appalachian music and culture.

The quartet is rounded out by Reed Jones aka the Renaissance man. He has toured internationally as a bassist with Blaylock and Redline but he plays most anything with strings, is a vocalist, a songwriter, author and photographer. He has his own blend of honors and recognitions including the 2006 SPBGMA International Band Championship which he won with Billie Renee & Cumberland Gap. 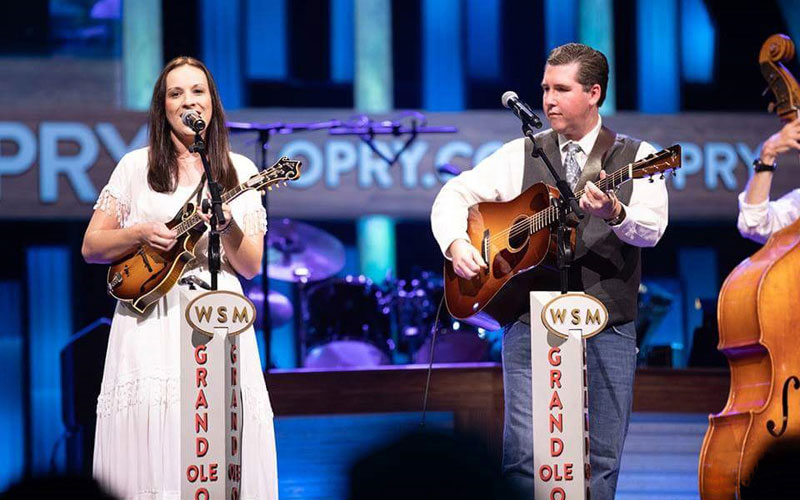 Our annual summer concert series offers an ever-changing schedule of bluegrass, folk and old-time mountain music by award-winning artists — quality entertainment for the entire family. Rich in cultural heritage,the series continues to be a favorite with locals and visitors alike. All concerts at 7:30 pm in the air-conditioned Lynn L. Shields Auditorium.

Secure your seats for the 2022 Season of An Appalachian Evening with our discounted season package.

Individual concert tickets are available on the  Calendar of  Events.

July 30 – Aubrey Eisenman and The Clydes 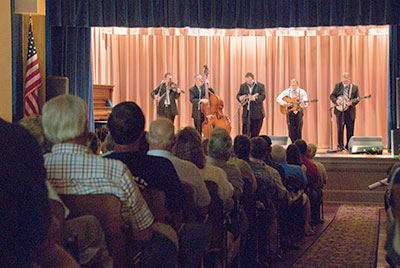 The Grand Old Stage
In the 1940-1950 era, the auditorium stage became home to musicians touring the mountain area – musicians heard on the "Mid Day Merry Go Round," a popular WNOX-Knoxville radio program.

It seems these musicians charged little or nothing for admission and put on a great show to a full house! Today’s performers follow in the footsteps of these great musicians and the smaller footprints of the many school children that have performed on this stage as well.

The Cafe is open for snacks and beverages, prior to each Saturday performance and thru intermission.

We commit to the well-being of our visitors and employees. Based on current guidance from the CDC, we recommend wearing a face mask while attending indoor concerts. Stecoah Valley Center’s COVID-19 Safety Policies are informed by the CDC. As a public facing facility, these policies will undergo ongoing review based on the best practices presented to protect our community, staff, volunteers and guests.