In the guidebook, noted folklorist Fred C. Fussell puts readers on the trail to discover the many sites in western North Carolina where this unique musical legacy thrives. Organized by region and county, Blue Ridge Music Trails of North Carolina welcomes readers into the rich worlds of bluegrass, old-time, gospel, and string band music, as well as clogging, flatfooting, and other forms of traditional dance.

The book features a CD with 26 songs by musicians profiled in the book, historic recordings of the region's most influential musicians spanning nine decades — available for the first time here — and songs based on true stories of love, crime, and tragedy set in the North Carolina mountains. The $20 book with CD is now available at the Stecoah Artisans Gallery; and can be purchased online at the Blue Ridge National Heritage Area website.

NEA Gives $10,000 to The Center For Concert Series – December 1, 2012 - The National Endowment for the Arts (NEA) has announced that Stecoah Valley Cultural Arts Center is one of 832 non-profit organizations nationwide to receive an NEA Art Works grant. Stecoah Valley Cultural Arts Center is recommended for a $10,000 grant to support the 2013 An Appalachian Evening Concert Series.

A Conversation With Lynn Shields

Courtyard of the Cherokee Opens 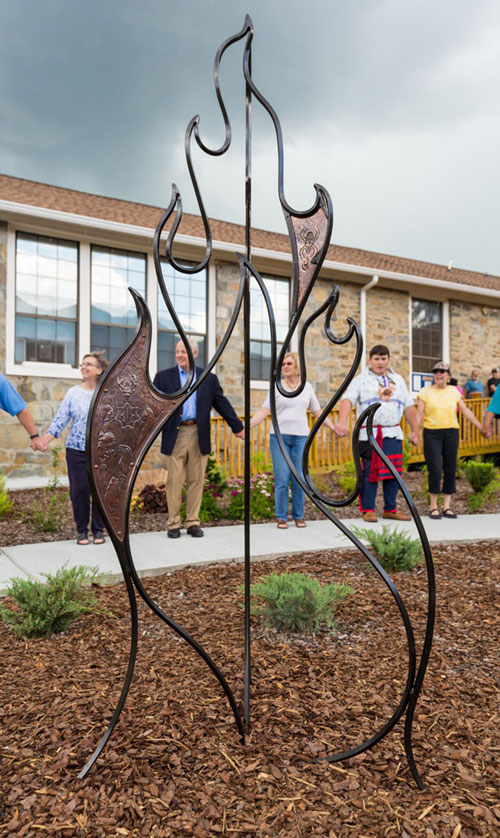 May 24, 2018 saw the grand opening of our newest addition, “Courtyard of the Cherokee” - an outdoor arts and culture exhibit that authentically represents the seven clans of the Eastern Band of Cherokee Indians. The exhibit is intended to educate and bring awareness to the public about the Eastern Band of Cherokee Indians, especially the Snowbird Community in Graham County.

The courtyard’s focal point is an Eternal Flame sculpture created by Nathan Bush, JR Wolfe and William Rogers of Rogers Metals. The sculpture features pounded copper elements that depict the seven clans and the Cherokee legend of the spider attached to a steel flame base. Exhibit panels designed by Anna Fariello of Curatorial Insights bring awareness of the Cherokee syllabary and the headers are translated into the Snowbird dialect which is different from the Cherokee dialect. The next phase of the project is artisan support and public education through Cherokee art classes and marketing of the exhibit.

The project was funded by the 2017 Joy W. Pope Memorial Grant in the Arts from The John William Pope Foundation. The Cherokee Preservation Foundation also awarded a grant for landscaping design and artwork and a subsequent grant for programming and marketing of the Courtyard. The Site Design Studio of Asheville, NC designed the courtyard and the landscaping was done by Taylor’s Greenhouse of Robbinsville, NC. 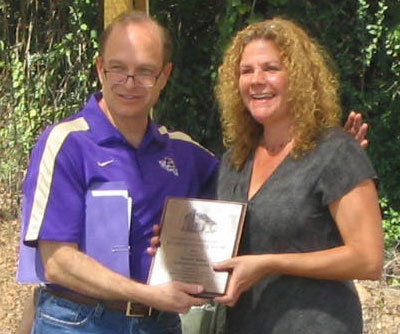 Each year, WCU bestows Mountain Heritage Awards on one individual and one organization in recognition of their outstanding contributions to the preservation or interpretation of the history and culture of Southern Appalachia, or for outstanding contributions to research on, or interpretation of, Southern Appalachian issues. Read more 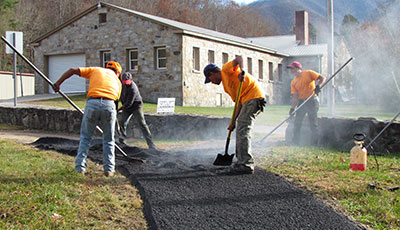 Stecoah Trail is Now Paved – The 1/3 mile trail at Stecoah is now paved, completely handicap accessible and open to all thanks to the good work of HMC Paving and the support of GREAT (Graham Revitalization Economic Action Team), Graham County Step Up Diabetes Coalition, Marshall University, and Bristol-Myers Squibb. 11/12. 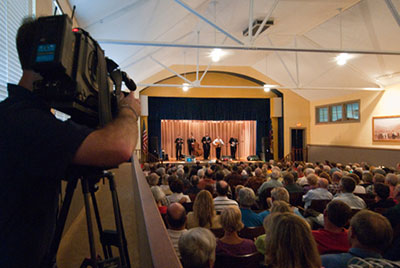 UNC-TV has featured Stecoah's An Appalachian Evening on its "North Carolina Weekend" show. Deborah Holt Noel and her crew came out for dinner and a show featuring Balsam Range. (view the segment).

Reba Louanne Jenkins from the Textile Studio appeared on the November 18 Craft Corner on WLOS-TV (Asheville). She demonstrated how to make an easy quilt pillow.